Toby is in the final year of his BA in Archaeology and Anthropology at UCL. In this article he talks about his experience of studying at UCL, the process of applying for Disabled Students Allowance and his experience of transferring courses. 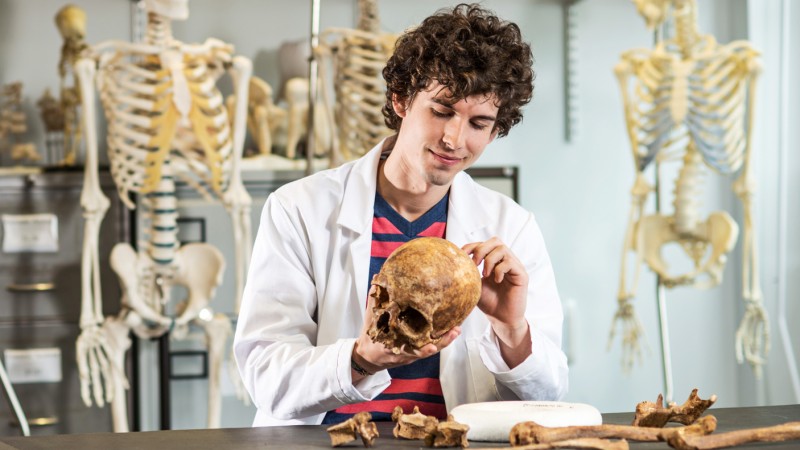 I’m currently finishing off my BA in Archaeology and Anthropology, and loving it. After a tough few years, I’ve finally settled into university life – later than most, but what’s important is that it did happen with time. I found the transition to university more challenging than most, but in retrospect, I feel that I could have eased my own troubles if I had known what I know now. Part of that happiness has come from self-acceptance and adjustment, and I’d like to share something of my own experience in that hope that others might find the process a little easier than I did.

As a naive eighteen-year-old, I couldn’t have been more excited to rock up at uni and begin my BA in Classics. I was expecting a total doss, and to slot right into my rightful place as the coolest kid on campus. O, the folly of youth!

Unfortunately, first year proved far tougher than expected. I moved into a huge Hall of Residence, hoping to make loads of friends right off the bat, but was almost immediately overwhelmed by shyness, and a sense that I was very “different”. I threw myself out in every direction, going to every party and club taster in the hopes of making a meaningful connection. I’m sure that this tactic – so heavily advocated in all the literature – works very well for some people, but I found myself increasingly anxious, exhausted, and lonely as I spread myself paper-thin. In retrospect, I should have worked harder on building bonds closer to home – with flatmates, coursemates, and maybe at a small handful of societies.

As I struggled to make friends, I began to overlook my studies. I struggled to keep track of my timetable, workload, and to-do list. I had soon fallen into a deep depression, and began to self-medicate with the drink and drugs that I had rarely been offered as a teenage outcast, but which were so easy to come by in halls.

By the end of the summer, I had had a change of heart, and came back to UCL to start a new degree in Archaeology. This time, I passed first year with a reasonable mark, and went on into my second year. I used the University of London Housing Service to find a flatshare, and, by luck of the draw, ended up sharing a great property with five wonderful people – a mixture of eccentric art students and social scientists, all drawn together by our inability to find accommodation under our own steam. Living with this group taught me the importance of perseverance in building meaningful relationships, and of keeping an open mind. It was at that time that I first approached UCL’s Student Support and Wellbeing service, of whom I had not previously been aware, at the suggestion of my personal tutor. All I wanted was access to a computer for exams (I find fine movements, especially handwriting, very difficult and painful), but was offered a far more extensive programme of support after finally disclosing my embarrassing diagnosis, which had hitherto been my most closely-kept secret.

I can’t speak highly enough of SSW. I was tested for dyspraxia and given a diagnosis. I was booked in for weekly meetings with a personal mentor and a study skills tutor, and given a package of assistive technology through the DSA, including a laptop, which saved me from the painful process of hand-writing notes and of being reliant on a flakey and distracting smartphone to organise my life. This support was immensely helpful, and brought about a sharp turning-point in my life. I came to terms with my diagnosis, and began to identify some of the problems that were holding me back. No more generic coping strategies for depression – I was finally able to acknowledge my real weaknesses and to counter them.

With the help of my mentors, I identified the main problems that were hindering me in my studies: an inability to keep to any sort of regular pattern of life, severe forgetfulness, difficulties in keeping to deadlines, an inability to focus on work, fatigue, anxiety on campus, and persistent depression. They helped me to structure my time efficiently, dividing the day up so that I got a certain amount done every day while still having time to relax (in the past, I had tended to think in terms of “all or nothing” – I would either work in long binges or do nothing productive for days on end). I timetabled chores such as food shopping in advance, set up an online calendar, wrote up reminders on paper to pin up around the house, and had a Statement of Reasonable Adjustment put in with my department, meaning that I could apply for a seven-day extension on any piece of coursework when necessary. Most importantly, they helped me to see myself as a perfectly valid and capable person with a disability to work around, rather than a walking diagnosis.

Toby is in the final year of his Archaeology and Anthropology degree at UCL.

I think it’s important to be honest and to share our experiences. Not all autistic people the same, but we are prone to suffering from similar sorts of troubles, some of which are particular to people like us. By recognising these quirks we can tackle them head-on instead of wallowing in self-pity as I once did. I’m sad to have realised all of this at such a late stage of my educational career, but thankful to have spent a wonderful few months as a better person. Learning to cope with university life took time and effort, but I think it would have been easier if I had had someone there to pass on their reflections at an earlier stage. Maybe someone will fine mine useful?

Most importantly, I should have been more open-minded and less exacting in my choice of friends. Friendship is often about compromise and perseverance – it’s important not to assume the worst of people simply because you don’t have a great deal in common, and to remember that being “normal” doesn’t necessarily make a person judgemental or malicious. Conversely, you probably do have far more in common with your fellow students than you think – it’s an old cliché, but you’re all in the same new and intimidating situation, and it’s unwise to write yourself off as an outsider in a herd of perfectly confident clones. At the same time, there’s no shame in keeping some of your eccentricity to yourself when appropriate – there is a happy medium to be found between “being true to yourself at all costs” and “creating a fake identity just to fit in”.

Don’t let yourself get bogged down in a disorganised mess of stress, and don’t feel ashamed of avoiding unfamiliar situations (e.g. nightclubs, club socials, or political events) if you think they’ll make you feel uncomfortable – it’s probably better to explore new things in your own time when you feel confident that the stress won’t get in the way of your life more generally. Try to find a support network, take all the help offered to you (you’re paying through the nose for this education, so don’t feel bad about claiming some service back!), and most importantly, don’t listen to the naysayers – your disability doesn’t define or invalidate you, and you have just as much potential to make the very best of your time at UCL as anyone else.

We use cookies to ensure that we give you the best experience on our website. If you continue to use this site we will assume that you are happy with it.OkPrivacy policy